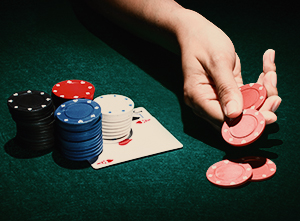 What amount do you put down to buy into a no limit holdem ring game? Usually there is a minimum and maximum buy in. Let's assume we are playing a game with a minimum of $20 and a maximum of $200. If you play a lot of holdem you probably saw players who buy in for the minimum and then try to double up. If they lose, they buy in for the minimum again. These tend to be the same players who take money off the table after a win if they can get away with it. Are you one of these folks? Is there an advantage in managing your bankroll like this?

We have to assume a couple of things before we start this discussion. Firstly, we'll assume you have a sufficient bankroll to play the applicable limits. Secondly we'll assume that you are a decent player. If you don’t have sufficient bankroll, the quality of your play will not matter. The short-term variance will get the better of you. If you are not a good player, you will consistently lose, regardless of the size of your bank roll..

I think that you are always in the best position when you have the maximum amount of money on the table. Therefor I recommend that you buy in at the maximum, in our example that is $200. This is mostly because you want to be in a position to maximize your profits when your opponent makes a mistake. Nearly 100% of the profit from no limit holdem comes from maximizing your profit on your opponent’s mistakes.

Poor players often make a huge mistake: they attach too much value to hands like AK, QQ and JJ. When you overvalue one of these hands, you will likely over bet preflop and commit yourself to the hand. I have frequently seen players move all in with AK preflop - just because they are hesitant to make the needed decisions after the flop.

When you make this mistake against AA or KK, you lose a large amount of money. Though this doesn't happen very often, when it does and you bought in for the minimum, then you can’t win the highest possible amount.

I am often also able to capitalize on a different mistake here. This is when a player with high pocket pairs doesn’t raise enough to make me fold smaller pairs. let's have a quick look at the math and implied odds. Probably one of every eight flops with a pocket pair will give me a set. Now I have an opponent who makes a raise that I can call.

Now I still have a chance to win more than eight times the bet when I hit a set. My opponent has made a mistake here unless s/he will be able to get away from a high pocket pair after the flop. You will find that very few players can do this until you hit the higher limits. My stack must be as deep as possible for this strategy to work.

Don’t miss out on some of your best opportunities at profit by buying in short.