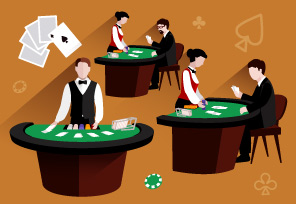 There are two distinct strategies for early round play in multi table tournaments. The first strategy is to simply survive into the middle rounds and the other is to attempt to double up early in order to use your large chip stack to pressure your opponents. There are positives and negatives to each strategy, but the good news in the case of early position play is the correct strategy works in both cases.

Because you will be at a great positional disadvantage throughout the hand, it is very important to only enter the pot with your best starting hands and to take the correct measures to protect these hands. For this reason the only hands I recommend playing are AA KK and QQ.

You will need to raise three or four times the big blind, to keep the blinds and other speculative hands from seeing the flop for free / cheap and catching a miracle two pair or better. I have witnessed many players limping with AA or KK allowing the big blind to see the flop for free and losing a large pot, sometimes their entire stack, when the flop appears very ragged but hits the blind.

To clarify the amount you need to raise, if the big blind is 50, you need to raise to either 150 or 200 in most games. This represents a large enough raise to make a call from the blinds incorrect with all but their best hands. Players who call with hands as weak as A6 or KQ will lose a great amount of chips over time, increasing your chances to win a great deal. What you don’t want is to give a hand like 64s or 98s a free look at the flop. These are the hands that hold the biggest danger to AA KK and QQ.

I am sure that most of you have noticed the lack of AKs and AK in my list of playable hands. These hands are drawing hands, though very strong ones, and I don’t like to risk my entire tournament in the early stages with drawing hands from early position. It is correct to gamble with these hands in other positions and later in the tournament, but I don’t recommend doing so here.

The final situation I will cover is when you are re-raised from a late position player. Many players will simply move all in when facing a re-raise in this situation. While there is nothing wrong with doing this with AA, it may be questionable with KK and especially QQ. Your decision will need to consider not only the abilities and playing style of the re-raiser, but also how he or she views your playing ability. If they know that you will only raise from early position with these hands, then you need to put them on a hand like AA KK or AK.

It is very hard to lay down hands like QQ in this position, but you are a large underdog against AA and KK and only a toss up against AK. But, it is better to live to fight another day, or in another hand in this case, than to run against a hand that has you dominated.