Moving Down a Limit at the Poker Tables 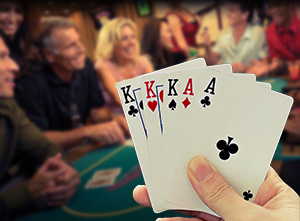 Though it is one of the most painful experiences for just about any poker player, there comes a time in almost every poker player’s career where they are forced to move down a level. This often happens when we move up to a new level before we are ready or before our bankroll is large enough to handle the swings that come at any limit. However, sometimes it happens because of a bad run of cards, or when we just need to work on our game at a safer level.

The important thing to remember for the health of your game and bankroll is there is never any shame in dropping down a level in limits. Poker is a game of making the right decision time after time, and as you have seen above, there are many possible reasons why dropping down a level may be correct.

I have seen many good poker players consistently play above their bankroll. This is a bad idea for many reasons, but the biggest one is that a bankroll too small for the limit has very little chance of lasting through a down swing no matter how good you are.

It is also important to remember that no matter how big your bankroll is, if you are not a winning player then you don’t have enough. This leads to another problem many new players have. They become fixated on bankroll calculations and requirements while they should be concerned with improving their game until they can consistently win.

I also see players whose ego for some reason won’t let them play at the lower limit tables, even though they don’t have sufficient bankroll for the higher limits. I have never felt any shame playing at even the .25 / .50 tables. As a matter of fact, I still often play at the .25 / .50 no limit and pot limit tables which have a maximum buy in of $50. Even if you play at much higher levels, you can learn a great deal about how people play by stepping down a few levels every once in a while.