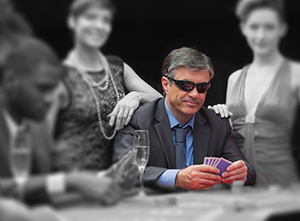 In poker one of the most powerful and productive plays is to isolate your opponent. The term isolating means you bet in a situation, or you bet a certain amount, so that you can play a hand one-on-one with an opponent.

For instance, let's assume you are in a tight holdem game. The first player acts with a raise and folds to you in late position. Now you re-raise so that those opponents who are left to act will have to call three bets to see the flop (two more for the big blind).

In this situation, only the very best hands can afford to call behind you. You will know if you are up against a very strong hand. Isolating can be effective in limit as well as no-limit holdem poker, and most other forms of poker too.

It is best if you play hands like high pairs and Ace/King with only one opponent. You are best off if you encourage other callers with hands that must improve in order to win. These would be for instance suited connectors and small pairs.

It can also pay to isolate an opponent when you are a much better player. This applies especially after the flop. Often when youre playing against a maniac it is a good idea to isolate him. Often maniacs enter the pot with average or poor poker hands.

Isolating an opponent before the flop lets you gain important information. If you have a pair of jacks and isolate the early raiser and s/he re-raises, you know s/he is showing a lot of strength.

Now you know that your jacks are likely not enough to win the pot. Usually a re-raise in this situation indicates one of the following poker hands: Ace/Ace, King/king, Queen/queen or Ace/King.

Therefore you have to be careful, especially if an Ace or King hits on the flop. Isolation is a great tool to add to your poker strategy. Be on the lookout foropportunities to use it effectively.