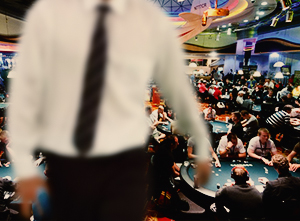 I entered a satellite tournament to qualify for a million dollar poker tournament a few days ago and as you can see from the title, made a quick exit. The reason I am writing about the hand though is not the early exit, but because it is an excellent example of a hand that I could have got away from and didn’t. Hopefully you will be able to learn from my mistake.

We were still in the first blind level and it was folded to me in middle position. I looked down to see J J, raised three times the big blind and it folded around to the big blind, and he flat called. The flop came 9 7 7 and he checked. I bet half the pot and he made a minimum raise. Then I pushed all in. As soon as he made a fast call I knew he had me beat. Before I pushed, my last thought was that he could have paired the 9 and be testing to see how strong I was. He flipped over Q 7 and I exited the tournament.

In my earlier poker playing days I would have been wondering what kind of idiot would call a pre flop raise with Q 7, but the only thing I could think after this hand was why I didn’t read all of the signs he was sending me, clearly stating that he had me beat. I had plenty of chips to compete if I had laid the hand down, yet I didn’t take the time to think the hand through. There is no excuse for this type of mistake and I deserved my fate.

First, there was no reason to risk all of my chips with a hand as poor as J J, and there was no reason whatsoever to assume he wouldn’t make the call pre flop with a hand with a 7 in it. I had shown strength before the flop and after the flop, yet he still check raised me. The only hand I could have been holding to beat him when he made the play was 9 9, and the likelihood of me having that and playing it the way I did was miniscule, especially in a tournament setting. He came much closer to playing the hand correctly than I did, though I won’t play Q 7 in a tournament unless I am down to desperation time.

So, there are two things I hope you learn from this hand. Never assume an opponent won’t play a crap hand, because until they prove otherwise most players can and will play anything. The second thing is you MUST take the time to think through every action you take at the poker table. Acting without thinking is a losing strategy. Don’t make these mistakes, especially in a tournament where mistakes are often final, and hopefully you will get deeper into your next tournament than I did. Best of luck at the tables!