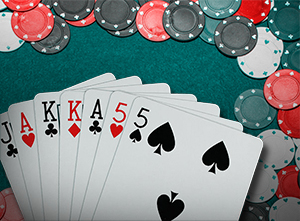 As you probably know, Holdem is the most popular game today. But what many new players don't realize is that until recently the most popular game was 7 Card Stud poker. Most of the same skills that apply to winning holdem play apply to 7 Card Stud poker as well. One skill that is much more important in 7 Card Stud poker than in other forms of poker is short-term memory. You must be able to remember what cards your opponents who folded had showing in order to determine your correct odds as well as the possibilities of what your remaining opponents may be holding.

7 Card Stud poker is played mostly for high only, but is also occasionally available in high/low split. Both are played using the following rules:

Up to eight players may play in a 7-card poker game. Each player places an ante and then receives two down cards and one face up card. The lowest face up card is required to start the betting action with a bet called the bring-in. The player with the lowest card showing may bet either half the lower betting limit or place a full bet (called completing the bet) or raise, with play continuing to the left. If the bring-in is only half a bet, another player may complete the bet or raise (complete the bet and raise).

After all betting is completed; a fourth card is dealt face up to each player. From this point on, the highest hand showing starts the action each round. Each player in turn may check or bet if there has been no action or call or raise when facing a previous bet. On this round, if the high hand is a pair, this player may check, bet the lower limit or the higher limit. There is no bring-in requirement after the first betting round.

In 7 Card Stud high/low split, there is often an 8 qualifier. This means that to have a hand that qualifies for low, you must have five non-paired cards eight or below. One thing that often confuses players is how to correctly determine which hand is the lowest. The easiest way to do this is to read the hands backwards like a number. For example, 8 5 3 2 A would be read 85,321. The lower the number, the lower the hand. Here are a few examples in order from lowest to highest to help you understand how this works.