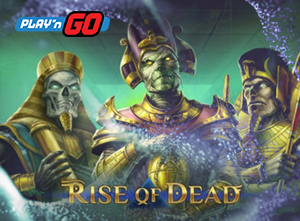 Developer, Play’n GO is taking punters on a journey to the pyramids of ancient Egypt where mystery and intrigue rule over the dead souls entombed within.

A game based on Egyptian myths and folklore, it focuses on the Pharaohs and the legend of the Book of Thoth which is said to grant the ultimate knowledge to the lucky person who can obtain it.

Play’n GO has decided to take a spin on the Egyptian theme yet again proving the enduring popularity of this setting in games, TV, movies and in pop culture in general.

CEO, Johan Tornqvist, has commented on the creative process behind the game

“Egyptian history and mythology is a very popular subject matter, be it in films, TV or games. We always aim not only to do justice to the source of our games inspiration but also to bring a different element to it, something that people may not be familiar with or haven’t seen before.

It’s this that separates our games from many others in the market at the moment and is a testament to the creativity of the company when it comes to creating entertainment.”

Of course, this isn’t the first time the developer has tackled Egypt…

…as they did it once before with Legacy of Egypt. But it’s clear the team at the company loves this setting and wants to do it right.

Out of This World Features

No slot game is complete with some fun and engaging features and to really give a theme the proper treatment, studios need to make something that will draw punters in and make them want to stay in that world.

And this game is no exception…

…because it has a suite of interesting special features to make gameplay more entertaining.

On offer are Mega Stacks that are active on every spin in the base game and one normal symbol is chosen to fill 12 consecutive spaces on each reel.

The gods are generous in this title because they allow Gift of Gods respins. Randomly in the main game reels 1,3, and 5 will be locked into place while the remaining reels spin.

…there are extra spin but with a twist. Scatter symbols activate the mode which can be infinitely re-triggered by more scatters landing on the reels. The twist comes into play due to extra rules about symbols geared at making hits just a little bit easier.

Such as the wild symbols appearing in stacks of 6 or 7 on each reel and the high paying symbols expand if they can create winning combos by doing so.

Based in Sweden, Play’n GO has been making online slots since 1997. They are known for their high-quality games such as the recently released Rich Wild and the Tome of Madness.

They supply gaming content to many of the world’s leading casino brands.