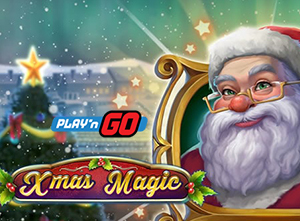 Developer, Play’n GO, is getting ready for the holiday season with a festive new release that’s all about the magic of Christmas.

Joining the vast library of media on this subject, the developer is banking on nice graphics and holiday cheer to entice punters to this saccharine-sweet offering.

It’s all about candy canes, presents and of course, Santa Claus, himself.

The reels are full of holiday spirit in this 5x4 game with 50 variable paylines. Add in the stacked high-paying symbols and some extra spins and that equals fun and magical time.

Adding to this feeling of magic is the game’s setting. A snow-covered plaza with a huge tree looks warm and inviting as the action happens on the reels in front of it.

Of course, everything in a game about the biggest holiday of the year is themed around the accouterments that accompany it.

Everything that people like about Christmas (or Xmas, if you prefer) is present in this offering by Play’n GO to make sure the atmosphere is right on point.

None other than Santa is the ruler of this magic kingdom and he appears as the bonus scatter. If three Santa symbols land on the reels the fun starts with 10 extra spins being awarded to the punters.

But that’s not all…

…because he is Santa, he brings a present too. The present for all good punters is quite generous because it comes in the form of a 4x the current bet bonus upon extra spin activation.

During the special mode, on each spin additional wilds are added to the central reels to up the odds of a big win.

And the feature can be retriggered too, for a maximum of 20 extra spins with additional wilds and stacked symbols.

What would Christmas be without some gambling? That’s why the slot comes with a gamble feature where you can double or quadruple your winnings. Or as the case may be, lose it all. Such is the nature of the gamble feature and here punters can choose to bet on card color or card suit.

This homage to all things Christmas is coming to casinos near you on 21st of November right on time for when the anticipation to the world’s favorite winter holiday truly heats up.

Play’n GO is an established game developer that got its start way back in 1997 in Sweden. Since then, the company has spread itself around the world with offices in Malta, United Kingdom, Philippines, and Hungary.

They are known for producing high-quality games such as Rainforest Magic and their stable GAT casino platform which offers multiple solutions to operators and for being a key partner in Microgaming’s Quickfire platform.

The company is also behind such popular slot titles as Tome of Madness and Wild Rails.