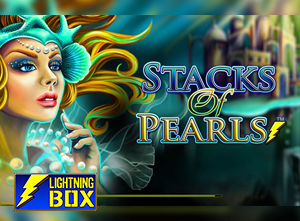 Game developer, Lightning Box, is dropping a new game that’s all about the high seas and the luxurious pearls that can be found within it.

It’s all about getting those fat pearl stacks because in this game they’re not just beautiful treasures but come with multipliers and trigger respins.

Stacks of Pearls is a 4x5 game with 30 paylines and it’s set in a mysterious underwater city ruled by the Goddess and the Kraken and home to various other creatures of the deep.

“It looks like there’ll be a bit of motion in the ocean with our newest game Stacks Of Pearls – a journey to see what lies beneath the waves.

“There are some really big wins on offer with our Respin Bonus feature meaning players could be in for bumper payouts.”

When it comes to features this new offering from the Sydney-based game developer is all about hitting big symbol stacks.

Special pearl symbols that appear on reels 2,3, and 4 can hold either a wild or a blank. The wild symbol replaces any symbol in the game while the blanks do not do anything.

The wild pearls also have another trick up their sleeve as they can hold x2 or x3 multipliers within them.

But they still do much more if they appear as stacks on the central reels. If two or three stacks appear 5 or 7 respins are triggered respectively with the stacked reels being sticky and holding in place.

This opens up chances for big wins and a maximum multiplier of x27 which is quite hefty.

The aquatic-themed slot from this Australian developer was exclusively available to punters playing at Kindred Group’s casinos but is now set for a wide release courtesy of iGaming powerhouse, Microgaming.

This new release is the last one in a string of new releases for this developer who is bringing their successful land-based titles into the online gaming world for punters to enjoy.

It started this July when the team collaborated with Incredible Technologies to supercharge the original and vastly popular Astro Cat game and turn into Astro Cat Deluxe by adding the Sky Wheel feature.

Both games themed around animals, one in the African Serengeti and the other a celebration of the Australian outback.

The game was brought over to American audiences in the state of New Jersey where online gambling was recently regulated.

Lightning Box is a multi-channel supplier of video slots to the iGaming industry. The studio is independent and based in Sydney and provides content for land-based, online, and social casinos around the world.

Founded in 2004 by former Aristocrat and IGT designers Peter Causley and David Little whose combined expertise has helped the studio produce such games as Dolphin Gold, Silver Lion, and Dragon Palace.