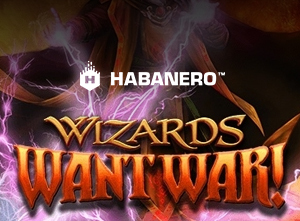 Game developer, Habanero, is announcing the release of a new slot game featuring the battle against good and evil and some magical features.

The game in question is Wizards Want War and it’s out and available at all online casinos that carry this developer’s titles.

A 5x3 game with 25 paylines, the game is all about a battle of the wizards who as the title says are itching for a war. The only way to find out why are they so eager to battle it out is to play the game and find out.

It’s a high fantasy offering from a developer known for high-quality titles that push the limits of gameplay.

“There’s nothing more magical than big wins and players can achieve them with our latest release, Wizards Want War!

“Featuring a virtuous and a villainous wizard, players can watch the two go head-to-head in spell-binding fashion thanks to immersive graphics and sounds. It’s sure to prove popular.”

In this slot game of two wizards testing out their mettle against each other it’s all about dueling. A battle of wits and magical ability takes place in the base game and in the extra spins mode.

The two wizards duel when their symbols appear on reels 1 and 5 respectively. The fierce battle then begins and a magical wheel selects one of five different configurations of wild symbols (the configurations look suspiciously like tetris pieces) and then the wizards duke it out in a no holds barred showdown featuring some eye-popping graphics and mesmerizing particle effects.

It takes three magical strikes for one magic warrior to fell another and once that happens the selected wilds pattern will be added on a random place on the reels.

That’s not the only thing that happens, because depending on which wizard won the fight there will be a different multiplier applied to the wins. Should the light side prevail the multiplier is a nice x3 but should the forces of evil best the warrior of lights dark days will come and the multiplier is reduced to a x2.

In addition to the base game duels, there’s also dueling in the extra spins mode which is awarded when special symbols appear on reels 1 and 4. In this mode punters will select the wizard they think will win and receive bonuses accordingly.

A good thing about the extra spins is that they can be re-triggered and the winning lines can also occur right to left instead of just the normal way around.

A game developer and supplier of other casino content such as table games and poker as well as platform solutions which originated in Eastern Europe in 2010 holding offices in Bulgaria and Ukraine and has since become a global name in the iGaming industry. They are present in many regulated markets including Italy where they recently signed a deal with operator Betflag.