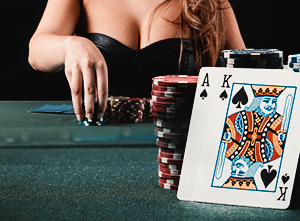 No-limit Holdem Poker, take a look at starting hand recommendations and some strategy for this card game, in this two part series.

The starting hand recommendations for no-limit are slightly different than those for limit holdem poker. The first reason for this is the importance of position is magnified because any player may go all-in at any time. Because of this, playing weak or drawing hands anywhere except late position can be expensive.

If you limp in with a weak hand and one of the late position players makes a raise, you must fold. You are out of position with a weak hand against a player who has shown strength. This is a losing situation and should be avoided. The second reason is that every time you play no-limit you should focus on not only winning hands, but also taking an opponents entire stack.

When the opportunity to break someone presents itself, you must capitalize on it as often as possible. An example of this follows (below). An early position player makes a standard raise of about three times the big blind and everyone folds to you in late position and you look down to see a pair of fours.

We both realize that a pair of fours is weak, but if you both have deep stacks (plenty of chips) I recommend calling to see the flop unless you are sure one of the blinds will re-raise.

The thought process here is that if you happen to hit a four on the flop, you will have a powerful yet disguised hand and have a chance to take your opponents entire stack, especially if they have AA or KK. In addition, if the flop does not help you and the preflop raiser bets into you, you can easily fold because you have nothing.

Depending on the climate of the game you are in, it may even be profitable to limp-in in late position with hands as poor as 56s at times. Of course you won't find that on my list below, but I have been in games that this was a correct play. As you gain experience you will start recognizing game situations that you can play profitably and capitalize on them:

I rarely call raises with anything but the pairs listed above unless I have a read on the raiser. My idea is to not lose money because of my kicker with AQ and worse to hands like AK.

No-limit holdem poker used to only be offered in tournament settings, but has recently started being offered in many card rooms as a regular ring game.

Most no-limit ring games have a set buy-in and offer the opportunity to buy back into the game if you are unfortunate enough to lose all of your chips. No-limit ring games can be very profitable for solid holdem poker players.

My recommendations for you when you start playing in no-limit ring games is to play extremely tight when first sitting down and only play your very best hands until you get a feel for the table and your opponents. No-limit gives the solid players an opportunity to use everything in their arsenal such as bluffing, pot odds, solid game skills and psychology.

Because of the ability to place any size bet, you can manipulate pot odds to make your opponents pay too high of a price to draw to their hand or make the price low enough that it is correct for them to call when you want them to. This alone can make no-limit one of the most profitable games you can find and makes the understanding of the correct use of pot odds imperative to anyone hoping to be a successful holdem poker player.

If you are going to be a lifetime winner at no-limit holdem poker, you must become a solid, tight/aggressive player. You must rarely call. Winning players tend to raise or fold. Bear in mind that because of the betting limits involved in playing no-limit, mistakes are magnified.

This doesn't mean that you should never just call, it just means that as you gain experience you will find yourself playing this way. Because this aggressive style of play when combined with tight starting hand requirements will mean that you are rarely behind at the beginning of a hand, and you allow your opponents many opportunities to make mistakes.

In closing, here are a few quick pointers to help you while learning to play no-limit holdem poker.

The first time that you look down to see pocket aces while playing no-limit holdem, your first instinct will probably be to move all-in. In a typical game, this will win you the pot, but it will likely only be the blinds as everyone else will probably fold.

When you have a great starting hand such as AA, KK, AK or QQ your goal should be to raise enough to make all but one or two opponents fold. Then if you are re-raised before the flop you can move all-in.