It Came From Venus Slots - New Slots at Betsoft Casinos 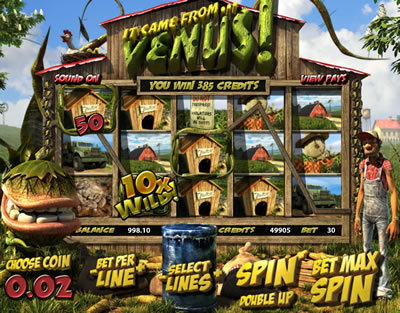 It Came From Venus slots appeared at Betsoft casinos just a few days ago, with 5-reels, 30-lines, bonus games, free spins, 2x-10x multiplier wilds, collapsing wins and a lot of hilarious 3D action! Watch a big-toothed grinning Venus flytrap steal the show and make you smile in these new slots.

Read our in-depth review of It Came From Venus slots to learn how they are played, also listed in our new slots section, and be sure to check out our Betsoft slots section to read all the Betsoft software 3D slot reviews.

The bonus game is called Save the Plant, and it’s triggered when three or more helicopter symbols appear. Choose one of five boxes to try to find the hidden plant.
The 2x-10x multiplier wilds will appear randomly during the games, which you will find is not very often, but they can help you win extra coins.

All in all, It Came from Venus slots wouldn’t be the same without its host, a grinning Venus flytrap who likes to antagonize its farmer. You can watch the flytrap monster gobble-up treats throughout the games, and it’ll make you smile, too. Play these new slots today!