Starburst Slots are Fun to Play at NetEnt Casinos! 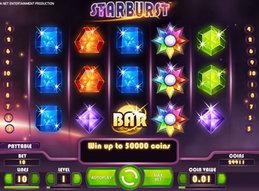 Starburst slots offer winning combinations in two directions, with 5-reels 10-lines, and expanding wilds switch-on a re-spin feature whenever they appear! Starburst online slots are definitely fun to play at Net Entertainment casinos, and need I say I had a blast playing them.

Read our Starburst slots review to find out how to play this latest NetEnt slot game. And be sure to stop by our new slots area, where you’ll find the newest slot games featured as soon as we find out about them. These new slots called Starburst can be found in our Net Entertainment slots reviews section, too; just follow the “new” tag.

Now, about this new Starburst slot game; I’ve spent at least thirty minutes playing it and had a hard time breaking away, because it was that fun to play. And of course, the 80’s music in the background of this game brought back memories for me as well.

The colored starburst symbol is the wild in Starburst slots, and each time it appears it will expand to fill the reel it sits on; be it on Reels 2, 3 or 4 (the only reels the wild will land on). But the exciting part about this expanding wild is that it also triggers a re-spin feature.

The Starburst slot game re-spin feature is fairly simple; the reel with the wilds will hold, while the remaining reels spin one more time. And you could get another wild to appear if you’re lucky enough, which will re-spin the reels yet another time. The game can award a total of five re-spins.

Head over to Mr. Green casino, or to one your favorite Net Entertainment casinos, and play Starburst slots today!