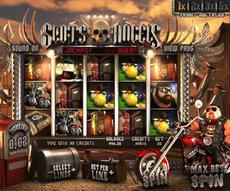 Slots Angels slot is a 3D animated progressive jackpot game with 5-reels and 30-lines, free spins, re-spins, a bonus feature and click me features, and the new Betsoft slots for March 2012! What more could you ask for in new slots from Betsoft? Not a lot, that’s for sure.

And speaking of a lot… There’s a lot of information on these new slots in our Slots Angels slot review, where you can learn how this game is played. You will find this new game listed on our new slots and Betsoft slots sections.

Slots Angles slot is a biker-themed online 3D video game and could well be one of the best Betsoft slots to date. Well, in my opinion it is. And what I like best about Slots Angels is the re-spins feature; where you get a free re-spin after every win and the payout multiplier advances after each win!

While playing all thirty paylines in Slots Angels slot game, the wager can be as low as $0.60 and as high as $75.00 per spin. The game play goes from left to right, as well as the payouts, and there has to be at least three of the same symbol on an active payline for a win.

To win the Slots Angels progressive jackpot; you have to get five Bearded Biker symbols on line one (the highest-paying symbol on the center payline) and make the maximum wager bet.