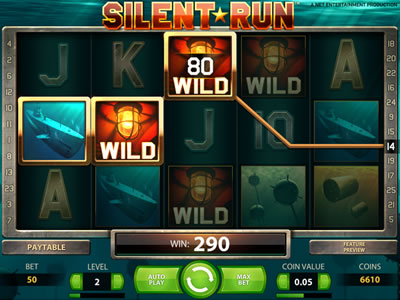 Read our Silent Run slots review to learn how to play them and to find out what happens during its wild features and bonus games. The Silent Run slot game is listed in our Net Entertainment slots area, as well as in our new slots section with a brief review.

What keeps my curiosity peeked while playing Silent Run slots is when the “echo wild” feature activates. It is triggered when a red sonar blip-screen appears on reel 3; which usually happens when reels 1 and 2 spin, and then reel 3 starts to spin fast while the game is paused.

When reel 3 stops spinning and the red icon appears, all symbols will fade, reels 4 and 5 will not spin, and the echo wild feature begins. Three sonar signals are sent out in search of hidden wilds among the other faded symbols.

When one or more blips are found after the three sonar signals; the symbols with the blips turn into wilds, the game goes back into normal mode, and any extra winning combinations will award payouts.

When two or more blips are found, after three sonar signals for the bonus game, a new scene will appear with instructions.

Once you activate the bonus game, you will have several ships appear on a mock-submarine periscope. Pick which ship you would like to fire a torpedo at (the amount of torpedoes you have, depends on how many blips were found before the feature activated).

Each extra torpedo (up to 5) will award a higher multiplier to the coins awarded for a destroyed ship. Because there is a x10 multiplier with a fifth torpedo, you can win up to 250,000 coins during the bonus game!