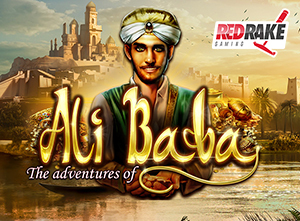 Inspired by the famous story from One Thousand and One Nights, Ali Baba seeks out riches yet again as he must evade the forty thieves who wish to foil his plans.

In this 6x6 slot with fifty fixed paylines, the players’ main objective is, of course…

…to open the fabled cave of the Arabian Nights myth – Sesame! We all know the magic words by now, and they will come flying to the reels when at least three bonus symbols appear. A respin feature will make sure that the other three symbols appear and form the word, S-E-S-A-M-E on the reels.

Yes, you heard right. The true bonanza starts once the treasure trove is opened as punters will be awarded infinite bonus spins. During this feature, gold symbols will become sticky and also fuse into bigger symbols to further multiply the win.

But there is a catch…

…because the thieves won’t just stand by as their treasure is plundered. When the winnings exceed fifteen times the initial stake, they can appear and end the free spins feature. One grace spin will be allowed, however.

Red Rake Gaming has decided to go all in on the concept of nudging the odds ever so slightly in the players’ favor and thus, this slot is packed with odds-enhancing features.

Players won’t be alone on their quest, just like Ali Baba wasn’t. His faithful companion, Morgiana, will appear as a 1x4 wild symbol boosting the chance for a win.

And that’s not all; from time to time, a Wins Tornado will blow across the board and duplicate one reel to give the punters yet another chance at that sweet treasure.

The supplier has set out to make a high-paying and feature-filled online slot, which players can take for a real money spin as we speak, as it went live on June 27th.

Red Rake is an online casino provider boasting over 30 top-performing video slot, bingo, poker and other table games including recent release, Super 12 Stars across many markets including Belgium, Italy, Portugal, Romania, Malta, and the UK.

They are a boutique provider to the iGaming industry who pride themselves on working closely with their partners to drive revenue through high-quality game production stemming from their vast experience with social gaming.

Recently, they have been nominated for the EGR B2B award  in the category Slot Supplier and experienced sharp growth as demand for feature-rich games is only strengthening.