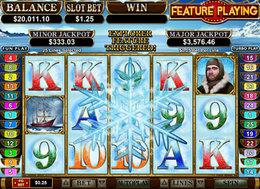 Polar Explorer slots appeared at RealTime Gaming casinos last week, with 5-reels, 25-lines, two random progressive jackpots, and a feature offering one of three bonuses with free games! These new slots also have scatters and wilds, with the wild being the main symbol that is featured mostly in the bonus games, and there is a feature guarantee, too.

Read our Polar Explorer slots review for all the information on how to play the game; complete with screenshots, wagering and bonus game info. You will find these new RTG slots in our new slots section and they are also listed in our RTG slots area, just look for the “new” tags.

Polar Explorer slots have a unique bonus feature, which is activated by a “snowflake pattern” in the center of reels 2, 3 and 4 (that’s something I’ve never seen before). And when the feature is triggered, one of three randomly selected bonus features will trigger; an Explorer feature, Discovery feature or Hidden Treasure feature.

The best way to learn about all the goodies in these new RTG slots, is to play Polar Explorer slots for yourself!