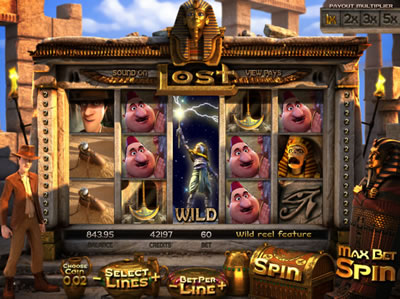 Lost slots have 5-reels and 30-lines with a mummy bonus game, an expanding wild, a re-spin and Click Me feature, and are new 3D slots from Betsoft! These new slots using Betsoft software were available to play at Net Entertainment casinos on 25th January, 2012.

Speaking of new online slots, you will find the rundown for Lost slots in our new slots section, where just a couple days ago we added the new Starburst slot game information. We should have the complete review on the Lost slot game for you to read, soon.

But for now, I will tell you how these Lost 3D slots are played…

The Lost slots re-spin feature will only stop when there are no more winning combinations. Yesterday while playing it, I won 850 coins during the re-spin features!

Oh, and here’s another fun feature in Lost 3D slots; the Click Me feature: Each time a Monkey appears on Reel #4, Reels 3 and 5 will fill with “Click Me” squares. Just pick each of the six squares until a “Collect” appears.

My best picks for the Pick Me feature; I got four out of the six squares before I found the collect, for a lot of extra coins.

Now as for the Bonus feature in the Lost slot game, I didn’t get it. Because in this game you need Four bonus symbols to activate the bonus game. But what I read, was, you have to select a door and if there is not a Mummy behind it, you win extra coins. You find a Mummy, the bonus game is over.

To break it down, playing Lost 3D slots was a blast. And I played it at Mr. Green online casino. I’m sure you can play it at other Net Entertainment casinos, too.

So what are you waiting for? Start playing the Lost slot game, today!