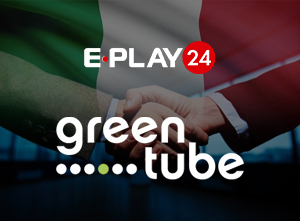 Game developer, Greentube, a part of iGaming giant, Novomatic, has entered into a deal that will help establish its position in the Italian gambling market.

The deal with E-Play24 will see the developer’s entire portfolio roll out across the casino operator’s platforms and brands.

Italian punters will now have the chance to take a spin on some of Greentube’s best games like Book of Ra deluxe, Lucky Lady’s Charm deluxe and Sizzling Hot deluxe as well as other Novomatic titles.

“We are delighted to expand our game offering to E-Play24 and their brands, further strengthening our presence in the Italian market,”.

“For [the company], Italy has become a key market over the last 12 months and we aim to be the leading supplier for the region, backing up the strong street market and land-based presence of our parent company Novomatic.”

Alessandro Grasso, E-Play24 group casino manager, added: “Being able to offer our customers the world’s most played slot, Book of Ra deluxe, means E-Play24 can be more in-line with current consumer demand. After months of development and hard work, we have reached this new and very important milestone.

“Among other things, we are currently working on many interesting projects that will be placed on the market in the coming months, all this to continue to expand our range of online games.”

The CEO of E-Play24, Antonio Tressanti has also commented on the partnerships by stating that the operator’s slot selection will grow not only in quantity but in quality and how there are a few suppliers that can boast such a wide range of quality content.

This partnership comes soon after the developer has signed a deal with juggernaut live casino provider Evolution Games to add the live casino offerings to their platform and make it available to their operator partners.

Evolution is one of the leading live games providers, known for their innovative takes on established and beloved table games, such as their Lightning and First Person series of games that bring new gameplay elements and features to tried-and-true casino entertainment.

This deal serves to establish the company as a serious player in the iGaming industry and make them better able to meet customer demands.

Since then, the company has published several games including the 90s hip-hop themed Really Wild and the newly released Sherwood Showdown.