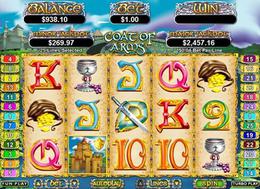 Accepts all Players
Except Kentucky PLayers

Read our Coat of Arms slot review to find out precisely how it’s played. Stop by our
new slots section in case you may have missed the latest new online slot games that appeared in the past couple weeks, from Playtech and Slotland casinos.

Coat of Arms slot has a scatter that is slightly different than the other Real Series slots, a gold shield that appears randomly on the first three reels. And no, it’s not an actual symbol, but an icon symbol that randomly appears on the top right edge of picture symbols. When you get all three of those icons to appear in the first three reels, you win 15 free spins that end with quadruple payouts!

Play Coat of Arms slot game to see how exciting the re-spins and free spins are!