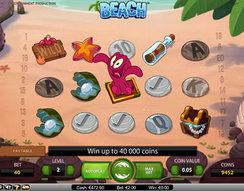 Beach slots have five columns, not reels, with 20-lines, a wild feature, two types of wilds and a free waves feature that makes them the most unique new slots on the net today!

If you’re wondering what free waves are, check out our Beach slots review, which will tell you what the waves will wash ashore while playing the game (and that’s in a literal since).
Beach slots are also listed in our Net Entertainment slot reviews section; along with Golden Shamrock slots, the last new slot game listed in the NetEnt slots lineup.

Play Beach slots and catch its waves of possible wealth. But be forewarned, it’s very addictive!