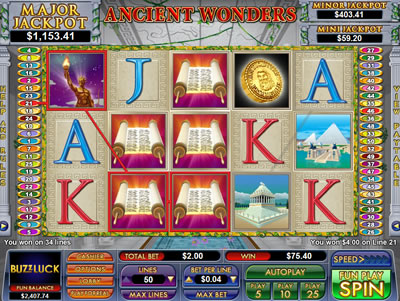 Ancient Wonders slots appeared online just the other day at BuzzLuck Casino, with 5-reels, 50-lines, three random jackpots, bonus features, free games and stacked wilds! These new slots at BuzzLuck casino will surely be “the buzz” for weeks to come.

The Ancient Wonders slot game has stacked wilds that appear on reels 2, 3 and 4, and the wilds also trigger the Feature game. And believe me, the wilds come up quite often during the game play (this coming from personal experience). But the Feature game did not come up as often as I would have liked.

When the Feature Game is triggered, by at least three wilds on reels 2, 3 and 4, a new screen appears with 7 Roman Wonders. You will get to pick three of the seven wonders, and can get up to four bonus picks. Each wonder you pick will award up to 100-times the bet.

The Ancient Wonders Free Games Feature is triggered by three Roman gold coin symbols anywhere on the five reels. You will get 7 free games with progressing multipliers. The first free game awards a x1 multiplier, the second game a x2 multiplier, and a x7 multiplier on the seventh free game.

Play Ancient Wonder slots for yourself and find out what the buzz is all about, in these new slots at BuzzLuck Casino!