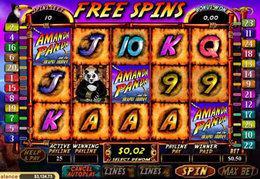 Amanda Panda slots have 5-reels and 25-lines with a free spins feature, a bonus game that is randomly triggered, wilds and scatters, all in an Indiana Jones style adventure! These new slots have been out awhile, obviously, but Amanda Panda is the latest arrival at Liberty Slots casino since they’ve appeared online, and worth mentioning.

Read our full review on Amanda Panda slots to find out how they are played. They are listed in our Wager Gaming slots area, within the list of reviews on all slot games available at Liberty Slots casino online; just look for the “new” tag. And you will find Amanda Panda in our new slots section as well.

The bonus game in Amanda Panda is triggered randomly, which means it can activate at the end of any game. The bonus game is called the Secret Chamber Feature, where you will have fifteen objects to pick from. From these objects, three things can appear; a big prize, coins or a Stop. Three stops will end the feature.

The Amanda Panda free spins will trigger with three icon scatters, but first you will have to pick from eight objects to grab a matching multiplier. And then twelve free spins will begin.

Put all of the above together with wilds and scatter payouts, and you will have an adventure. Perhaps not like Indiana Jones, but pretty darn close.

Play Amanda Panda slots today to find out what its adventures will hold for you!