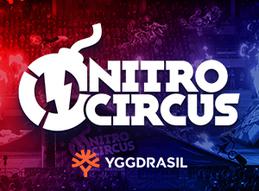 The Nitro Circus video slot has finally been released by Yggdrasil Gaming. It's been a much anticipated title because of all of the hype around its association with the Nitro Circus tour of extreme sports, and we're glad to see it finally in front of players.

You'll see different riders from the extreme sports tour on the reels along with helmets from their respective sports. This all happens across 25 paylines with five reels and four rows, which is a much larger piece of screen real estate than what you typically see for that many lines.

The focus of this title is the Nitro Jump ramp. This is in reference to the Giganta Ramp actually seen on their live shows, which is a 15-meter ramp that they jump off of. In this game, the Nitro Jump will give you an opportunity to pick a risk level to shoot for bigger stunts for bigger wins.

However, the riskier the jump, the more likely you are to wipe out.

What's really cool about the Nitro Jump is how many options you get to customize your attempt. You can pick different vehicles, different speeds and so on, and the bigger the vehicle, the bigger the chance of winnings. If you crash, however, then you'll take down a small, minimum win as a consolation prize.

Yggdrasil has included other features in this title as well with a Nitro Blast mini game and a set of free spins. You can get extras like multipliers, wilds or free spins during the Nitro Blast feature, and the free spins themselves have additional features added in for an increased value.

Overall, this game is seeming like it was definitely worth the wait as players line up to take their shot at hitting a big win off of the Nitro Ramp and taking down as big of a payout as they can along the way.

Press Release, Buckle Up for the Ride of Your Life With Yggdrasil's Nitro Circus Slot Game yggdrasilgaming.com, November 15, 2018