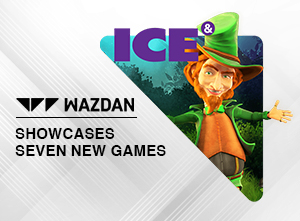 In January, Wazdan said that they would postpone the announcement for their two new February titles to coincide with the ICE event in London this year. However, instead of simply announcing two new additions to their gaming portfolio, Wazdan went above and beyond during their ICE showcase.

The company is known for pushing limits and consistently churning out exciting new content, but nobody expected the seven-game blowout that Wazdan unveiled in London.

During the event, participants were able to take all seven games for a spin to test out the gameplay and enjoy the exciting graphics and classic Wazdan features.

Wazdan's Chief Marketing Officer Jeremy Fall said that the team was "delighted [to] have been able to showcase [the games] at ICE 2019 where attendees got a close look at what makes Wazdan games so unique." He also said that the entire development team had put in tireless amounts of work in preparation for this massive reveal.

Magic Stars 5 and Space Gem were the stars of the show this year.

Magic Stars 5 takes players on a thrill ride with stunning graphics, big wins and an enticing soundtrack. It's available for both desktop and mobile, and it pays at any position on the reels. It also includes many of the interesting features that Wazdan is known for such as double screen mode, ultra fast mode, Volatility Levels, energy saving mode and ultra lite mode.

Space Gem is an energetic intergalactic journey that sends players hurtling through space to collect colorful gems and scoop up planet-sized prizes. The game is set against an engaging soundtrack and stellar backdrop, and with features like wilds, respins, energy saving mode and unique gambling opportunities, it is set to quickly become a favorite.

Wazdan has made a name for itself by innovating a host of features that set their games apart from others in the industry. This dedication to offering unique and exciting gameplay to customers has given the company an enormous competitive advantage. They have remained committed to creating an original and extensive library of slots, table games and video poker titles, which makes them fan favorites.