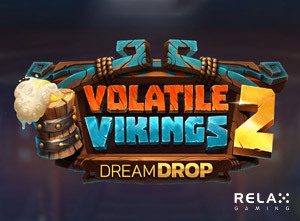 Relax Gaming, the iGaming aggregator and supplier of unique content, announced the release of its latest jackpot slot game, Volatile Vikings 2 Dream Drop. The new game is a sequel to the original Volatile Vikings and features similar gameplay with one major difference - a new math model. After the release of the Jurassic Party, it's time to saddle up and take on some Vikings! Grab your sharpest ax and prepare to take to the seas in search of big wins!

Take on the Vikings for Big Wins Today

This sequel to the original Volatile Vikings game features even more thrills and spills, as well as bigger jackpots and better graphics. The minimum bet is just $0.2, and the maximum betting option is $100. The RTP of 94.80% is below the industry average and this title comes with high volatility. The layout of the game is 6-5, with paylines that pay anywhere. This means that there are plenty of ways to win, and you never know when those big wins might

Heralding its release, Simon Hammon, CEO at Relax gaming, said: “We’re delighted to introduce the world to the third game in our highly anticipated Dream Drop series, Volatile Vikings 2 Dream Drop. Players absolutely loved the original Volatile Vikings for its gripping features and mechanics, so throwing a progressive jackpot into the mix is certainly going to be great cause for excitement.”

Over a Decade in the iGaming Industry

Relax Gaming has been increasing its library of games for almost 10 years, giving them a wealth of experience to research and test which types of features and functions casino players appreciate the most. In addition to its well-known partnerships with some of the top online casino content aggregators, the supplier is constantly searching for new places to showcase their growing catalog of games. This casino provider has launched many casino games where the majority are slots; however, there are also a few table games available. In 2019, the company released a new version of The Final Countdown video slot, created by Big Time Gaming. This was one of 50 new trade deals the company signed in just a few months - a clear indication of Relax's commitment to providing their players with the best possible gaming experience. Thanks to its dedication to creating high-quality games and continued expansion into new territories, the brand is quickly becoming one of the leading names in the online casino industry.