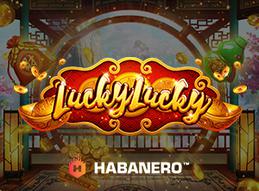 One of the quickest developing suppliers of premium slots and table games, Habanero Systems, decided to challenge players with its latest release. Inviting them to immerse themselves in the sakuras and get Lucky Lucky…

…they brought a visually stunning game with just a single payline. The long-awaited creation, despite simple in the diagram, stands good chances to become a must-see brand due to a creative set of features.

Representing a treat for all the fans of Asian art and aesthetics, this creation brings the most typical and beloved symbols of Asia. Placed on a pagoda with a backdrop of breathtaking waterfalls and famous sakuras (Japanese cherry blossoms), the game includes icons such as golden bonsai trees and lucky red money bags. A single line, though implying simplicity…

…actually comes to life thanks to powerful features. Among the most noteworthy ones are golden pot wilds which boost potential winnings. Simple but effective, this title incorporates the studio’s famous and recognizable graphics and sounds.

Speaking of far-east themes, the team has already tried its luck with this widely popular visual approach, which resulted in the more than interesting Fa Cai Shen. The 3x5 diagram is well-equipped with a variety of options, demonstrating the spirit of China at its finest.

As the trends evolve, it has become a common thing to spice the reels up with as many potential winning combinations as possible. Moreover, suppliers tend to pack releases with a plethora of dynamic features and maintain gameplay rather actionably. However, Habanero opted for a bit different approach and decided to implement only one payline. As Toni Karapetrov, Head of Corporate Communications at the studio pointed out:

“Lucky Lucky is a reminder that slots can be uncomplicated, fast and simple, while still being fun and engaging. Featuring just one payline, the game couldn’t be easier to play and aptly-themed symbols, top-of-the-range graphics, and immersive sounds means players are sure to love its appeal.”

Habanero is a dedicated community of skilled designers, developers, and mathematicians, with a management team of over four decades’ worth of experience in betting and gaming. All the games are hosted on their own in-house platform, making it possible for consumers to access the content on a variety of devices, including mobile. Supplying creative content to both land and web-based establishments…

…they have licenses to operate in multiple jurisdictions. Their catalog, which has slow but quality growth, features a fine collection of creations such as Four Divine Beasts, London Hunter, Gangsters and several more. Diverse in thematic, the portfolio strives to meet a variety of demands and preferences.

SOURCE: Miller, George. “Immerse yourself between the sakuras and get Lucky Lucky”. European Gaming. May 31, 2019.