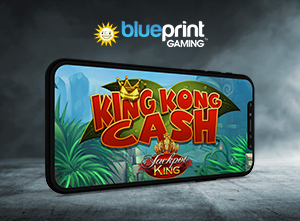 One of the leading slot providers, Blueprint Gaming has launched a new version of its popular game – King Kong Cash slot. The original released in 2016 became an instant hit amongst the players, and its reboot brings even more excitement and engagement, according to the brand’s statement.

Some nice additions are implemented in the new edition, in a form of more special features and opportunity to hit immense jackpots. Thanks to the inclusion of progressive system and Wheel King option, the gameplay is much more exciting and entertaining.

All the previous features of the old version are in place with the same 5×3 grid setting. But the gameplay is boosted with a couple of new ones, so the players can enjoy more bonus rounds and modifiers.

The classic’s gameplay is also enriched with five Monkey multipliers. When the sleepy Kong symbol is awakened randomly, it will trigger one of the modifiers, such as Banana Cannon Wilds, Golden Barrel Super Spins, and King Kong Spin Streak. Alongside numerous special features, the prospect of hitting jackpots might also attract a bigger audience.

A Word From the Developer

This upgraded mobile-friendly title is a result of the increased demand...

...from brands and players for the release of the main Jackpot King prize, as well as Regal and Royal pots addition, enabling the slot to become more popular in the communities.

“The reel king has swung into the Jackpot King series, much to the delight of our operating partners and loyal fanbase. King Kong Cash has become fans favorite ever since it was launched four years ago and the addition of the three huge cash pots is set to make this classic slot even more appealing to players who have missed its charms so far.”

The provider promises it will take additional steps to enhance its offering...

...while adding new titles and revamped classics like King Kong Cash slots to its Jackpot King catalog, including the long-anticipated edition of Sausage Party™.