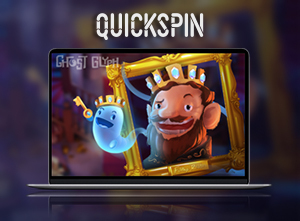 The Swedish game development studio, Quickspin, has a new treat for its players – the spooky Ghost Glyph! slot. As a provider famous for its groundbreaking gamification tools, it has once again managed to combine highly engaging gameplay with stunning visuals.

Quickspin has a way of making its products both exciting and very visually appealing. This game is no exception, and also comes with big winning potential.

The timing of the release couldn’t be better – the official launch is scheduled for September 8th. That’s more than enough time for players to get familiar with it and for online casinos to add it to their libraries before Halloween.

What makes this slot perfect for celebrating this holiday?

Well, its theme revolves around an old, haunted house. Hidden underneath its grounds is a completely different world where ghosts have a life of their own, each with its unique ability, quirkiness, and characteristics. While it is a dark theme, Quickspin lightened it with a humorous twist and superb animation.

As a second installment of the Glyph series…

…the newest title takes Golden Glyph’s intriguing mechanics to an even higher level of action. Aside from clusters, it features medium volatility, more features you can count and a 31% hit rate in the base game, making the room for winnings of up to 2000x.

Michael Spinks, The Art Lead and FX for this project, commented the upcoming game:

“We’re trying to achieve a feeling of a gaming level, with the mechanics of a slot game. We want characters to come onto the reels to activate the features so the player gains an understanding of each character’s ability during the gameplay, and builds an understanding of how the game works very quickly. It is a predecessor of the Golden Glyph, but we’re trying to accomplish a completely different feel with a dark humorous twist.”

Tumble Mechanics are available in both the base game and bonus rounds, implying that any symbols that are part of a winning cluster are removed and empty positions are filled with symbols falling from above. Any new wins are added to the existing win and the tumbling ends when there are no new winning clusters.

But that’s just the beginning of the numerous special features this slot has to offer. Those are:

As will other features, each unique in its own way. This title is one all lovers of one-armed bandits should check out after its global launch.