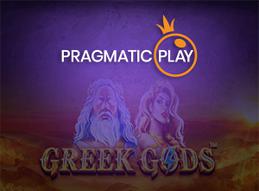 Developer, Pragmatic Play, has unveiled its newest slot title, Greek Gods, set to release later this week to all operators who carry their games.

The company is returning to Greece as a source of inspiration after the recently released Hercules & Pegasus and their older titles like Wild Gladiators.

Greece is a deep well of inspiration…

…and this new release comes with some interesting features to shake up the established norms.

As everyone knows, Gods are capricious and impulsive. That’s why the main feature in the game consists of random prizes that appear on the top of reels 3,4, and 5.

These prizes can be cash, or entry to the two different bonus games.

The prizes are won…

…when three scatters appear stacked on the reel. When that happens, the prize at the top of the reel is won. Prizes are randomly chosen at the beginning of each spin in the base and extra games.

The first bonus game is the Wheel of Fortune, and it can only be accessed through the Random Awards mechanic.

Once this happens, a wheel will reward punters with a prize in the x10 to x1000 span based on the total bet.

…the wheel can also be activated during the extra spins mode.

Three extra spins are awarded plus one spin for every scatter above the five minimum.

The best thing about this mode is that the rewards now appear on top of every reel and the Wheel of Fortune prize also be claimed.

Spins are retriggerable too, up to a maximum of 40 in a single session.

Pragmatic Play has really made a Herculean effort to fill this title with engaging features and create something new using a tried-and-true theme.

No stranger to history and myths…

…the developer has previously published Aladdin and the Sorcerer, an epic tale of Good vs Evil, and John Hunter and the Scarab Queen which takes punters to the mysterious pyramids of Egypt.

Pragmatic is a game developer, live casino content producer, and supplier of casino software to the iGaming industry.

Well-known for their innovative slot games, and state-of-the-art live dealer offerings (featuring real professional dealers and streamed in ultra-high-definition) and their commitment to making the player experience as fun and exciting as possible.