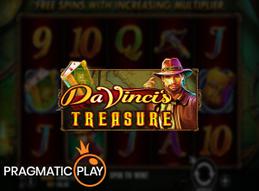 The John Hunter series of slots by Pragmatic Play puts players in an exploration and adventure setting, and the newest game to use this theme is Da Vinci's Treasure. This is based on a lot of conspiracy theories about hidden items and ideas associated with Leonardo Da Vinci, and a lot of his inventions are included as well.

Da Vinci's codex is a part of a series of notebooks he kept on a variety of topics, and it's often thought to have some type of secret code involved that is associated with some of the secrets that we alluded to above. In this game, however, the parts of the codex come together to form bonus symbols. Get three of these, you'll get different bonus features available.

Like many titles based on giving players a lot of excitement, this game focuses primarily on bonus features. One option is an instant win round where you'll pick from a variety of paintings, and your choice will give you a random value. On top of that, you can get free spins with a multiplier on your total winnings worth as much as 12x.

If you make it to the maps bonus round, you'll see the series lead character John Hunter across a map with 23 different locations. A giant wheel will spin to help you advance Hunter across the game board, and the further you make it in the game, the bigger the rewards you'll unlock.

After each round on the map, you can risk your winnings with a multiplier of as much as 5x, and the rewards for coming out on top are tremendous.

This is likely to be Pragmatic Play's last big release before Halloween rolls around in October, and that kicks off the holiday season. They've had a lot of big releases so far this year, and with the holidays coming up, it's prime time for holiday-themed games and other titles that they'll likely be coming out with.

From now until January is prime time to take advantage of what they're putting out there, so keep an eye out for new favorites.