Play'n GO Will Be Launching Three New Titles At The Same Time! 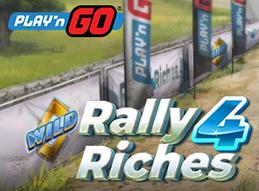 Play’n GO is one of those providers who are bringing new slots to the gambling market weekly. However, launching not one, but three releases simultaneously managed to get us by surprise. A triple rollout is announced for the midst of June, freshening up the iGaming scene with a trio of brand-new titles into the market.

Software providers constantly come up with fresh strategies to compete with other studios and ultimately beat the competition. This unprecedented move by the Swedish developer is a complete game-changer that will force the competition to level-up their game.

Tapping Into The Bingo Market

The provider’s expansion into the bingo market has broadened its footprint and allowed Play’n GO to reach wider audiences. As the brand known for trailblazing innovations and exciting features, each new product is raising the entertainment value and the quality of the player’s experience.

…because they are enriched with pick and click bonus rounds, pattern prizes and instant mystery rewards, representing just a tiny bit of the studio’s drive for modernization.

Such releases are already very popular across the globe, but the developer believes that two new titles will become a huge hit in Latin America since bingo is the preferred genre among the players in this region.
To recall, the provider’s LatAm presence begun in December 2019.

What Bonus Rounds Does the Rally 4 Riches Slot brings?

Rally 4 Riches is a sports slot, with a lot of action. As a is a classic 3-reel game, it provides an impressive real-time racing animation sequences for greater player interaction.

Its gameplay will make your adrenaline pumping thanks to its immersive bonus feature - The Race. Once activated by landing of the bonus game symbol on the bonus reel, it will transport players to a 24 square Championship Race Bonus Game Board. Here, they have to move according to a randomly generated number roll that determines their next position.

Each of the 24 spaces containing a different reward - a multiplier that multiplies the bet or a Nitro boost that moves a player forward several spaces. The gearstick in the real-time race sequence will determine how many spaces you will move forward using a randomly generated number roll.

Johan Tornqvist, the chief executive for the developer, described this latest slot with jackpots as highly engaging and entertaining:

“Rally 4 Riches has a great bonus feature for players to enjoy, and we’re thrilled to bring it to our audiences. They can experience the high energy excitement of a rally race in an innovative, entertaining slot, that will keep them captivated way beyond the finish line.”