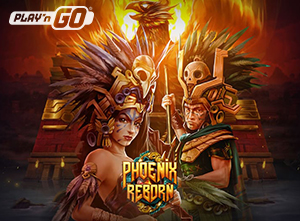 Play'n GO takes users along on a thrilling adventure through ancient Aztec civilization with its most recent video slot release, Phoenix Reborn.

Travel Back to Ancient Times As An Aztec Warrior

This slot will transport players to a time of ancient warriors and untold treasures. The game showcases stunningly realistic graphics, an engaging soundtrack and sound effects that are both relaxing and invigorating.

Phoenix Reborn has five reels, six rows and 40 fixed pay lines. Players must match three or more symbols along a pay line from left to right to score a win. However, there are plenty of exciting features to help users score more winning combinations.

The phoenix symbol serves as the game's wild, and when it appears on the reels, it expands to fill the entire reel so that players can rack up the maximum number of wins for that spin. It will substitute for every symbol except the scatter, including the two stacked warrior symbols, which are the highest paying symbols in the game.

One of the most exciting aspects of Phoenix Reborn is the free spin feature. When players land three or more of the golden Aztec mask scatter symbols, they win up to 20 free spins. During the free spin minigame, the expanding wild phoenix symbol is guaranteed to cover one reel at random, and there is a chance to land multiple wilds across the remaining reels.

In addition, landing two or more golden mask scatters during a free spin will tack on between three and 20 bonus free spins for even more winning potential. There is no limit to how many free spins a player can accrue in this mode, so there is significant opportunity to rake in serious cash.

Play'n GO is one of the leaders in the online gaming industry. The company's innovative, detailed and original slot titles have earned a reputation among suppliers of online casino content, and the Play'n GO team is constantly striving to produce better and more exciting gaming experiences for its users.

The game development firm has won industry awards for its consistent commitment to excellence, and the company is constantly looking for new ways to grow, expand and improve in order to deliver unforgettable service for online casinos across the globe.