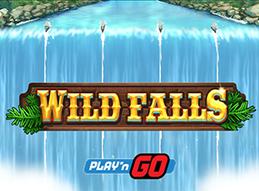 Play'n Go has decided to start off the new year with a very strong new release. This comes in the form of the Wild Falls video slot, a game that has a ton of action that centers around a set of wild treasure chests that come over the edge of a waterfall with chances to land on each spin.

The gameplay for this title revolves around the fact that there are three reels (the second, third and fourth) where wild chest symbols can show up. These symbols are also scatters, and they help you to get more payouts by being involved with a number of features.

To begin with, they are all available to be wild multipliers with value of 2x, 3x or 5x each during the randomly generated Gold Rush feature, and any winning combination that uses one of those wild multipliers will be increased in value accordingly. On top of that, the multiplier values can combine multiplicatively to give you total multipliers as high as an incredible 125x for even more action.

The River of Gold and More

If you get all three wild chests on the reels at once in any position, you'll trigger the River of Gold feature. This is a free spins mode, and it has a special sticky/walking wilds feature where any wilds on the reels to start with and any additional wilds that appear will walk one square downward for a new free spin. This feature continues until there are no more wild symbols left on the game board.

With the new year upon us, we're going to be looking at the build to ICE Totally Gaming in about a month where all of the major software suppliers will be expected to make big announcements about what's to come for the rest of the year. Play'n Go has wasted no time, however, and they've come with a big release right out of the gate. It's clear that they're setting the pace for 2019 and that they're looking to show the competition what they're made of with great releases like Wild Falls.