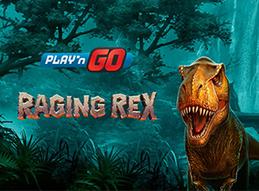 It's official that the end of 2018 is here, but Play'n Go decided to get in one last release before the new year officially comes around. This comes in the form of the Raging Rex online slot, a game that is definitely bringing a whole lot of action.

Your initial look at this title will show you that it's much bigger than what you're probably used to with a whooping six reels, four rows and 4,096 ways to get paid on every single turn. You can wager as little as $0.20 per spin with this title as well, which makes it great for players at all levels with a maximum cost of $100 per turn for high rollers.

The t-rex symbol is a wild that appears stacked sometimes, and if you fill an entire reel with them, then you access a special re-spin feature. You'll get free re-spins as this stacked wild moves its way one spot to the left over and over until it reaches the first reel for the final spin. You can get up to five free re-spins with guaranteed wilds like this, and that's a particularly valuable feature with 4,096 ways to get paid on each one of them.

Three or more of the meteor symbol triggers up to 30 free spins at a time with the Raging Spins bonus mode. This mode activates while giving you an instant payout of five times your total bet, and it can be re-triggered with two or more meteor scatter symbols an unlimited number of times.

During this game mode, the t-red wild symbols can be wild multipliers that combine for total wins of up to 243x their normal value. On top of that, the wilds are always stacked on one of the reels for each and every free spin. These extras combine to give the free spins mode an overwhelming amount of value, which is where a lot of the action-oriented gameplay comes from. The regular gameplay is fast and furious with all wins only requiring three of a kind to win, but these features put it over the top.