Pearl of the Orient Slot Debuts for iSoftBet 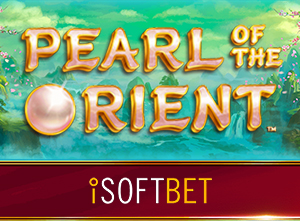 The most recent release from iSoftBet is the video slot Pearl of the Orient. Before you dismiss it out of hand as being just another Asian-themed title among many, you should check out what they've done to blow the sub-genre out of the water with great features.

This is a 10-payline game that makes the most of the screen real estate, and you'll notice that with extra spots for symbols up above the regular game board. This is used in the bonus feature with free spins and expanding wild symbols where you can add upgraded symbols to the reels. What this does is take low-paying symbols and convert them over to higher-paying counterparts. The end result is that you get better chances for higher wins, and that's something all players can get behind.

Breaking Out of the Mold

When you have a sub-genre such as Asian-themed slots, it can be difficult to break away from feeling like you're just another round of the same old thing. iSoftBet was able to break out of the box by offering strong graphics combined with a particularly exciting style of play and a feature set that you aren't going to find anywhere else. A certain level of originality and strong design is necessary to pull this sort of thing off, and that's exactly what they're good at.

It was announced earlier this month that Pearl of the Orient will be the next to last release of the year by this company with one more game coming. While we won't be surprised if it's a holiday-themed release considering the time of year, we also won't be surprised if it has nothing to do with the holiday season. This comes on the back of this company receiving a nomination for Game Developer of the Year at the SBC/Casino Beats Awards that will come in London on December 4, 2018, so it's clear that they're ending the year on a strong note and will be taking a ton of momentum into 2019.