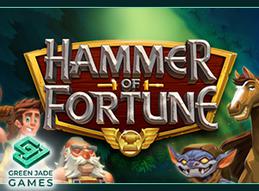 There are several thousand video slots that have been developed over time between the online and land-based markets. In the time that these games have been produced, certain genres and sub-genres have emerged within that selection. Green Jade Games is pushing forward into trying to create a new genre to add to that list, and it's looking like something that players could be very interested in.

What Green Jade wants to do is produce a set of online slots that combine the typical elements of these games with elements from the gaming industry as a whole to offer players more control and a more in-depth experience. While this type of thing has been tried before on numerous occasions, it's always good to see new things being tried that players can really sink their teeth into. They're starting this approach with their Adventure Slots series of games, and a new release is already out.

The Hammer of Fortune Slot

Hammer of Fortune is the first entry into this new genre as a part of the Adventure Slots series. The idea here is clearly to tap into the influence of gaming genres like MMORPGs to give players more depth to their experience, which is something that is always wanted by a large number of players. There's not much information available about this game just yet other than it will be their initial foray into this attempt at defining a new genre, and the game will be available at casinos operated by the MRG Group.

MRG has been running since 2007, and they operate a number of very popular sites like Mr Green Casino, Redbet and others. They have licenses in a variety of different regulated markets like Ireland, the United Kingdom, Malta, Italy and Denmark, so they're clearly a company that has a lot of clout in the industry as a whole. It's interesting to see a company this big really pushing to get games developed in a new genre, especially since they're primarily known for operating online gambling sites and not necessarily for having games developed.