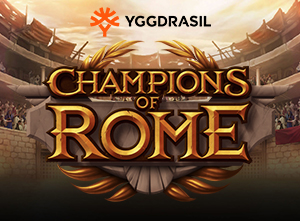 There's no denying that we've seen plenty of games in the slot genre that center around Roman and Greek themes, and this includes a lot of titles with some kind of focus on gladiators fighting in an arena. The latest Yggdrasil Gaming slot is another entry into this sub-genre, and it comes in the form of Champions of Rome.

However, don't let the theme trick you into thinking that you've seen everything that this game could possibly offer already before. Instead, they've managed to do some pretty great things with this slot.

What Sets Champions of Rome Apart

With such a saturated sub-genre as this, Yggdrasil definitely had their work cut out for them in terms of making sure that players weren't just going to be exposed to the same old thing again. With a game set around battles to the death in the Colosseum, they used a special pairing of free spins modes: a deathmatch mode or a training mode.

In the training mode option, you'll get eight free spins, but you can keep all of your payouts normally. However, if you go for the deathmatch option, you'll have fewer overall free spins with a chance to get a 4x multiplier as long as you break a certain total winning payout. If you don't make this amount with your wins over those few spins, then all of your payouts are forfeited. However, you'll still be given a small payout at a minimum with an additional shot at the training mode round as an added bonus.

If there's any company that really knows how to put together titles that players will love, then it's Yggdrasil Gaming. They've been absolutely killing it with their latest releases, and that just goes to show that they have their finger on the pulse of the players. We've seen some super solid HTML5 slot releases from them, but with Champions of Rome, we also see integration of their iSENSE technology, which means that this game will play as smoothly via mobile as it does through their web-based desktop platform.

Overall, it's not difficult to understand why this is such an exciting new release for players, and that's particularly the case for players who love a lot of action.