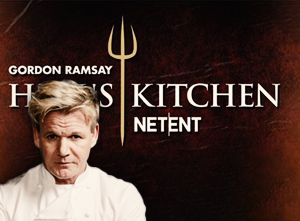 NetEnt is about to cook up a real storm in the igaming world with a brand-new release.

One of the most famous TV chefs of all time, the celebrity gastronome and restaurateur Gordon Ramsey is finally getting his own online slot.

The game is coming later this year and is based on the extremely popular reality TV cooking contest Hell’s Kitchen.

Famous for his short temper and off-color language, Ramsey has quickly become one of the most interesting and exciting presences in the world of reality TV programming.

Fans of his shows and character will love…

…the fact this new gambling offering will include famous catchphrases culled from iconic moments in the shows.

Rock Star of the Restaurant World

First appearing on TV screens in the 1998 mini-series Boiling Point, Ramsey has since been in a large number of cooking-related programs. Hell’s Kitchen is one of the most enduring, having aired its first episode in 2005 and still going strong.

In addition to these, he is known for such shows as Kitchen Nightmares, Hotel Hell, and the critically acclaimed MasterChef competition.

Ramsey is also a successful restauranteur, and the holder of a staggering 16 Michelin stars, with eateries located across the world from the UK and France to Singapore and Hong Kong.

“Gordon Ramsay is a true rock star of the restaurant world. His strong personality and use of colorful vocabulary as front-man of Hell’s Kitchen have earned his legend status as a multi-Michelin starred celebrity chef, with fans all over the world. Just as importantly, this allows us to produce a true slot with a strong narrative and a lot of adult fun! We can’t wait to see what our players think of what we have in store for them.”

The deal that will the online casino supplier make games bearing Gordon Ramsey’s likeness was brokered by Global Merchandising Services.

“NetEnt’s commitment to entertainment has made it a clear leader in the online casino industry and we’re thrilled to support the company with the addition of Gordon’s branded title.”

More About the Developer

NetEnt is a leading provider of premium igaming solutions to the gambling industry. Their cutting-edge platform powers innovative games. With a portfolio of over 200 games and offices in Malta, Sweden, Gibraltar, Poland, Ukraine, the UK, and the USA, it’s a company that has been and remained a pioneer in online gambling.

The company develops flexible digital casino solutions so their operator customers can be unique and informed at the same time.