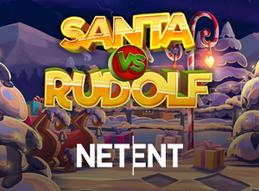 Game developer, NetEnt, is celebrating the most magical time of the year with a new game release featuring two Christmas icons – Santa Claus and Rudolph the Reindeer.

But there’s a different take on their relationship here. Gone is the “will you guide my sleigh tonight” and instead Santa and Rudolph are engaged in an all-out prank war.

You see, the mischievous reindeer has hidden Santa’s magic hat and now it’s up to the jolly old Saint Nick to find it in time for Christmas.

“Santa vs Rudolf is following on from the huge success and laughs of Jingle Spin and a merry addition to our seasonal portfolio that perfectly captures the joy and cheer of this holiday season. Santa vs. Rudolf continues the humorous trend with goofy antics from our two favorite holiday heroes battling it out for seasonal supremacy. This narrative will be hard to resist even amongst the scrooges in our player base! Happy Holidays!”

The prank battle between Santa and Rudolph takes place on a 5x3 grid with twenty fixed paylines. But there is a small twist in the fact this is a win both ways slot meaning that winning combinations are counted both lefts to right and right to left.

This, of course, extends the number of possible ways to win.

When it comes to the features…

…the developer has packed this release with plenty of engaging and interesting mechanics. One of them is the walking wilds – the Santa wild and the Rudolph wild appear on opposite ends on of the grid and when they do they trigger respins.

During the respins, the wilds move horizontally across the grid and respin every time.

And should the wilds meet in the middle - the extra spin round will be activated.

Punters will be given a gift of 10 extra spins and they can be retriggered if the wilds meet in the middle again up to a maximum of 30 spins.

But that’s not the end…

…because there are two more special features. The Rudolph spins and the Santa’s Gifts.

In the Rudolph Spins mode, there are three spins with five randomly placed wilds and the Santa’s Gifts mode is a pick game where players pick icons that can contain cash prizes, multipliers, or signal the end of the game.

In the end, all the prizes and multipliers are collected and the player is awarded the sum.

From Halloween to Christmas

The developer is fond of holiday-themed slots as their previous release The Wolf’s Bane proves.

From the creepy to the merry, NetEnt is a leading provider of games and other casino software to the igaming industry. Their portfolio has more than 200 high-quality and innovative games and their gaming systems have processed more than 44 billion gambling transactions in 2018.

SOURCE: “NetEnt brings a battle of Christmas spirit to the North Pole in Santa vs Rudolf”. NetEnt. November 28, 2019.