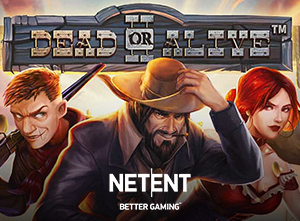 Dead or Alive 2 is the sequel to one of NetEnt's most exciting and beloved slot titles of all time, Dead or Alive. Players can enjoy all of the thrills and adventure they have come to love from the first title, but they will also get a whole new experience with even more ways to win.

This thrilling new video slot from Net Entertainment will transport players back to the familiar Wild West town they remember from the original Dead or Alive, but there is plenty of new action to be had.

Dead or Alive 2 is an extremely volatile game, and this means that there is potential for seriously huge wins. Players can win up to 100,000 times their bets, and there is also a customizable volatility option for the free spin minigames so that players can choose whether to risk it all or play it safe.

Like its predecessor, the game features five reels, three rows and a slew of bonus features and action-packed minigames. There are also scatter wins, wilds, sticky wilds and three free spin games in addition to the hunt for the "legendary Wild line."

When a free spin game is triggered, it will be the Old Saloon, High Noon or Train Heist. In the Old Saloon, all wins are doubled and sticky wilds will add an additional five spins to the counter.

At High Noon, all wild symbols become multiplier wilds. During the Train Heist game, whenever a wild symbol appears, the win multiplier and free spin counter are both increased by one. If a player reaches x16, five additional free spins are added to the game.

The team at NetEnt knew that designing this game would be a big undertaking because of how beloved the original game is.

Henrik Fagerlund of NetEnt Malta remarked that it is "a real responsibility to deliver a sequel to a game held in such high esteem," but he also notes that they took the ideas and requests of the online slot community into advisement while crafting the game in order to deliver something that fans would truly enjoy.

Fagerlund ended by saying that they are "incredibly pleased with- and proud of- the outcome of Dead or Alive 2," and he believes fans will be as well.

Press Release NetEnt Heads Back to the Wild West With Dead or Alive 2 www.netent.com, April 27, 2019.