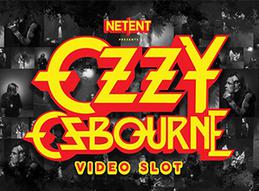 NetEnt has announced that it will be adding yet another wildly popular musician to its lineup of branded games. In addition to greats such as Jimi Hendrix, Guns n' Roses and Motorhead, NetEnt will be releasing a stunning new slot featuring The Prince of Darkness himself, Ozzy Osbourne.

This deal was brokered with Global Merchandising Services, which is the firm that partners with Osbourne to manage his merchandising and brand deals. The GMS chairman Barry Drinkwater commented that the company is "excited to add another of [their] artists to the exciting NetEnt Rocks family of games."

Osbourne is best-known for his role as lead vocalist for the heavy metal band Black Sabbath throughout the 1970s. He also made a considerable name for himself as a solo artist after he parted ways with the band. Ozzy Osbourne has sold over 100 million albums in his career, and he is still a household name today.

Known by most as The Prince of Darkness, there are few famous personalities as iconic as Osbourne. As such, it's no surprise that NetEnt chose him to take center stage in their latest of star-studded online slot releases.

NetEnt's Director of Game Products Bryan Upton rightly sums up why this collaboration with Osbourne is sure to be a success: "Rock stars don't come much bigger, better known or charismatic than Ozzy Osbourne."

In addition to his extensive rock career, Osbourne has starred in a reality television series and appeared in several movies. His popularity transcends music, and the following that he has developed in his nearly 50 years of fame is enormous. Choosing someone as influential and universally loved as Ozzy to headline this new slot simply makes sense.

NetEnt is one of the leading providers of top-tier online gaming solutions. They have become known for their award-winning games and are consistently on the cutting edge of new and innovative ideas.

The brand has over 200 stunning games in its portfolio, and it is the name behind slots like Starburst, Vikings and Gonzo's Quest. In addition to the NetEnt Rocks lineup, the company has also created other branded games such as the wildly popular Aliens and South Park slots.