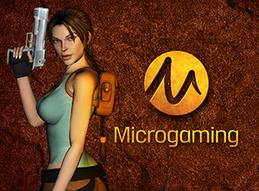 Licensing agreements with the owners of real-world brands that are already well-established can go a long way for online slot producers like Microgaming. However, they have taken this even further with the announcement that they have reached the 15-year mark in their agreement with Square Enix to use the Lara Croft and Tomb Raider brands.

To celebrate, naturally, they have announced that a new slot in the series will be coming up later this year.

What We Know About This Upcoming Game

Interestingly enough, the only thing that we do know 100 percent for sure at this point is that this game will be produced by Triple Edge Studios. This isn't all that surprising considering that this developer has an exclusive deal for them to produce titles for the Microgaming Quickfire platform, so this third installment in the Tomb Raider slot series will join their already high-quality offering.

Previous Titles in the Series

The first two games in the series were extremely popular. The first, which is also widely considered the first branded slot ever produced in the industry, was Lara Croft: Tomb Raider, and it made its debut back in 2004. A few years later in 2008, the follow-up came in the form of Tomb Raider: Secret of the Sword. This game had updated graphics that were great for the time and followed a different style of gameplay that involved trying to collect parts of an antique sword.

Now that we're in 2019, it'll be interesting to see just how far the slot world has come in comparison to what was considered the top of the line back then.

In several weeks, the ICE Totally Gaming 2019 event will happen, and more details about this new Lara Croft game will be released then. It'll be a pretty big deal, which that event always is, because they'll be up against major announcements from a lot of their key competitors. However, all that means for the players is even more to get excited about because this is the one event that really sets the tone for the rest of the year. If Microgaming has decided to make this one of their biggest announcements at ICE, then you know it's going to be something special.