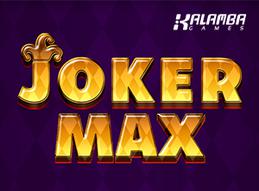 Game developer, Kalamba Games, is starting out 2020 with a splash, a follow-up to their massively successful Joker Supreme.

…the offering puts its own twist on things that make it innovative and engaging.

It’s all about the multipliers here as special Joker wild symbols can multiply any wins they’re a part of.

But the twist comes from the HyperBet option. The punters set the multipliers themselves. In exchange for a higher bet it’s possible to set the value at 1x, 3x, 5x, or even a massive 10x.

This setting also controls how many extra spin rounds will be given when three or more scatters appear on the reels.

HyperBet is a feature in many games from this developer such as Caribbean Anne which also featured these options.

In most games, punters need to be patient and wait for the bonuses to trigger.

…as entry into the extra spins can always be purchased via the HyperBonus option. The price depends on the multiplier and extra spin number combo selected as well as the current bet level.

It’s a high risk high reward scenario matched by the base game itself given its quite high volatility rating.

Another feature of the extra spins…

…is a collection symbol which, when three are collected, grants an additional three spins.

With 40 paylines and an RTP of 96.1% players will be taken on an exciting and dynamic journey.

But innovative betting options are not the only thing that will excite players. For those who love chasing really big wins, there’s nothing better than a good old fashioned jackpot.

And Joker MAX has them in spades – four different levels represented by Bronze, Silver, Gold, and Platinum.

They are awarded by special jackpot symbols that can appear anytime in the base game and in the extra spin round.

The more symbols land, the bigger the jackpot which is awarded.

Taking inspiration from the classics…

Spinning this inspiration into new and exciting forms has been the developer’s modus operandi for quite some time as evidenced in previously released like Goldfire 7S.

This newest take on fruit machines is available right now at all online casinos who carry games from this software provider.

Kalamba Games was founded in 2016 by a team of industry professionals. A fast-growing and successful B2B provider, it has spread out into the world and now has offices in Malta and Poland.

Self-described as a next-generation data-informed casino games supplier, the developer is seeking to disrupt the industry through innovative slot offerings and promotional tools.

The new year is shaping to be a successful one for the company after an already solid 2019 that saw the release of such titles as Big Bounty Bill.