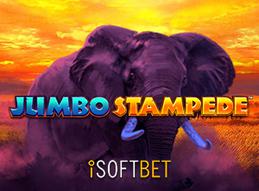 iSoftBet is known for putting out lots of great games on a regular basis throughout the year, and one of their earliest titles of 2019 is the new Jumbo Stampede slot. This title offers an overwhelming amount of action and a fun African safari type of theme with a bit of a twist compared to other titles in the sub-genre.

The first thing pretty much every player of this game is going to notice is that the format is huge. There are six reels and four rows, which makes it substantially larger than the standard layouts. With that having been said, they have not been reserved at all about how they use this larger grid since it's an all-ways game with 4,096 ways to win.

It goes without saying that this is a ton of ways to get paid on each turn, and that's just the start of the in-depth action that this game has to offer.

The golden scatter symbol is one of the places where most of your attention will be in this game because it's responsible for triggering the free spins. You can get as few as eight and as many as 50 free turns at one time thanks to how this scatter activates the bonus feature, and this free spins mode is full of extra ways to get paid. This includes payouts for symbol combinations that are not on adjacent rows and wild symbols that turn into 2x or 3x wild multipliers, which are extremely valuable on all-ways format games.

iSoftBet is a company that has gotten their games into a lot of casinos and on a lot of software platforms because they bring quality on the level of the best in the industry, and they do this on a consistent basis with virtually every title that they release. You can see this in the Jumbo Stampede game and how they have entered the African safari sub-genre in a strong way that makes them stand out for that niche audience. They also have other great releases that come out on a regular basis, and that means their portfolio is jam-packed with games that give players awesome experiences.