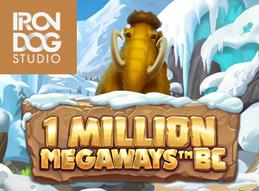 A renowned creator of high-quality slots, Iron Dog Studio, is adding a new release to its portfolio - 1 Million Megaways BC. The titles take players deep in the past, back to the Ice Age and feature thrilling gameplay with stunning visuals.

…this slot has been pre-released exclusively with the WHG. It is scheduled to be available to other operators in regulated markets all around the world from 2 September.

During the exclusive pre-release period, players can access the game via brands such as MrGreen and the UK-based WilliamHill.com. The operator will also be featuring the 1 Million Megaways™ BC in a nationwide UK television advertising campaign later this month.

Besides the engaging gameplay enriched with special features...

...the studio has incorporated the megaways mechanic that is increasing the winning potential to the massive 1,058,841 ways to win!

It is the first time in slots history that a game comes with so many winning options.

The First of its Kind

While theplayers are already familiar with megaways mechanic...

…implemented in various slots for a while now, this game is a precedent. As the first release that provides over 1 million ways to win, it is a true game-changer.

Besides its huge winning potential, the titles feature the unusual setup - 6 reels in the base game and 7 reels during the features. It also comes with an RTP of 96.2% and high volatility, making it a perfect for those eager to show off their slot playing strategy.

Kevin Reid, Chief Commercial Officer at Iron Dog Studio parent company, 1X2 Network, said that the title has all the potential to become a hit:

“1 Million Megaways™ BC is the first ever Megaways™ game to offer players more than one million ways to win. This, combined with or Lock-it Reels system, will deliver plenty of mammoth wins.

We are thrilled to be able to offer 1 Million Megaways™ BC to our operator partners, and for William Hill to be featuring it in its upcoming UK television advertising campaign. The game really does have what it takes to top the charts and we can’t wait to see players landing some beastly wins.”

Thanks to the game’s superb graphics take players are transported to a harsh and rugged environment, set in the Ice Age era. Punters can place wagers in a betting range from 0,2 coins to 20 coins.

Iron Dog Studio has made the base game engaging on its own since every winning combo boosts the multiplier up to a maximum of 8x.
But the real excitement starts when four tumbles in a row and trigger the extra spins that open potential for the player to enter the bonus round with an x1,500 stake win.

Additional spins begin with reels shaking and making their way to the additional prehistoric Mammoth Reels. The added reel expands to nine symbols and adds:

As an additional bonus...

…Lock-it Reels system is also activated during complimentary spins. Meaning when reels expend to the maximum height, they will stay locked. This applies for the based 6 reels with 7 symbols, as well as the nine when Mammoth Reels is active.

When Mammoth Reels and Lock-it Reels are both active at the same time...

It looks like 1 Million Megaways BC is a thrilling game that slot lovers wouldn’t want to miss. Users with accounts at MrGreen casino and WilliamHill.com can check it out right now, before its global launch at the beginning of September.