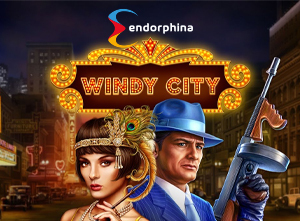 Throughout February and March, leading gaming provider Endorphina was launching one exciting game after another. During this period, an award-winning Czech iGaming studio upgraded its portfolio with Cash Tank, Aus Dem Tal, 2020 Hit Slot and Troll Haven slot. It seems like this brand is heading full steam ahead since it's now launching another engaging game - Windy City slot.

Encompassing atmosphere of the famous roaring 30s, this title is taking players back to Chicago right at the epicenter of bootleggers, gangsters and smooth jazz. With a standard 5x3 grid, it promises nice wins over 10 paylines.

This thrilling story captivates with lights, sounds and theatrics of one of the most memorable eras. As soon as the reels start spinning, leading to a extra spin round, double up game and a chance to confront the powerful Mafia boss Don, the players will be drawn back in the past and on the edge of their seats. With the right strategy and a dash of luck, punters have the opportunity to win some quite rewarding prizes.

Fans of the roaring 30s will be impressed with the number of details that faithfully reflect the atmosphere of Chicago during prohibition. Stylish gorgeous ladies, ruthless gangsters, crime lords, cigars, guns and images of banned alcoholic beverages are just some of the symbols spinning on the reels of this modern new slot.

High-quality graphics and animation combined with the bebop soundtrack in the background are perfectly rounding up the theme. The Windy City during 1930 was associated with gangsters and mafia who ruled the underground, but the period of prohibition also saw the growth of the famous skyscrapers and interesting architecture.

To highlight the time when organized crime was blooming, other components of the game include The Mafia Boss. An important part of the gameplay since it acts as wild symbol that can substitute for all symbols except for the scatter.

Car symbol is the scatter and landing three of them will trigger the extra spins feature, awarding the 10 spins. Each new scatter acts as a wild with substitution powers during this round.

An Era That Never Goes Out of Style

By the words of Maria Bashkevich, the head of marketing at Endorphina...

...the 1930s will never go out of style, implying that the studio’s newest release is not just aesthetically pleasing, but also mathematically and functionally reliable.

“During this difficult time, we feel the urge to bring even more joy and endorphins to the players, to keep them entertained and cheer them with traveling around the globe while staying safe at home. Windy City is a great slot to forget about everything and dive into a charismatic gangster world. It has bright graphics, catchy music, and new math. I hope this slot will be warmly welcomed”.

Since the beginning of the year 2020, Endorphina was one of the most productive gaming developers. Showcasing on ICE and launching fabulous games with engaging features and big wins like Aus Dem Tal and the latest Windy City slot is just a glimpse of what it has in store for its players in future months.