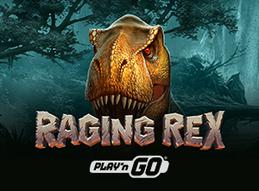 Play'n Go is pretty well-known for being a company that likes to bring quality releases after quality releases, so it's not surprising that they would start off the new year with a really solid video slot. The new Raging Rex game is the first title they've let loose with in 2019, and there's a lot going on with it.

Things to Look Forward To

First thing's first: You're going to have 4,096 ways to get a win on each and every spin. That means that there are over 4,000 opportunities to hit some kind of payout every turn, so it's pretty obvious that there's a lot of action going on here. The hit-rate is high, and the volatility is pretty reasonable as a result, which is kind of surprising considering how feature-dense this title actually is.

For example, the way free spins are handled in this game is dino-mite. There are multiple game modes with stacked wilds, wild multipliers, re-spins and all kinds of other features that bring some real value and excitement. For example, if you get a stacked wild all the way on a reel, then it'll walk to the left over and over with free re-spins until it walks off of the edge of the screen. A guaranteed wild reel on a six-reel game with the all-ways format is the exact kind of thing that helps to drive the action in this slot.

If you know anything about Play'n Go, then you know that they make some great games that virtually always get excellent reviews. They're not changing that strategy just because it's a new year, and you can see them sticking to their winning gameplay with Raging Rex. They're not just sitting around waiting until ICE Totally Gaming to come in February. Instead, they're taking it to the industry and saying here's what we've got to offer. Players recognize this, and they cast their vote towards this level of quality by picking out Play'n Go titles to play. If they're starting the year off like this, we're eager to see how they're going to carry that momentum on into the rest of 2019.