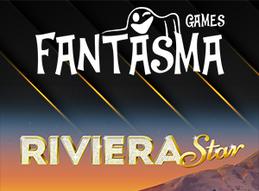 Developer, Fantasma Games, is taking punters to the French Riviera in their newest title – Riviera Star.

The bright light and indulgent luxury of the Riviera are known far and wide. It’s also home to a true gambling Mecca – the Monte Carlo Casino.

This famous venue has been in films, books, TV shows, and many other media and has stood for decades as a symbol of all the best that gambling has to offer. The glitz, the glamour, the breathtaking high-stakes wagers.

The story of this offering begins…

…when for quite suspicious persons enter the Monte Carlo Casino with a nefarious goal. Unbeknownst to each other and all the other patrons – they’ve come to pull the casino heist of the millennium. Which of them will be successful in the end? Only one way to find out and it’s to play the game.

Regardless of who succeeds and who fails, punters are in for a night of high-stakes mischief and lawlessness.

“The team has done an excellent job of creating a perfectly balanced slot with a unique Superstar feature that combined with an unlimited multiplier, delivers plenty of big win potential that even the Riviera’s rich and famous will be envious of.”

As the four suspicious but colorful characters vie to see who will complete the heist successfully, in this 5x3 offering with 20 paylines, punters can expect many interesting to happen on the reels.

The first of such is the respin feature which activates any time there is a winning combination on the reels. The symbols that were part of the win will be held in place while the reels respin. Should another win happen there will be another respin. This continues until there are no more wins.

…is the superstar wild symbol which can appear on any spin in the base game. The symbol is placed randomly on one of the middle reels and is a sticky wild with three charges. If there’s a winning combination the charge won’t be depleted but non-winning spins deplete a charge.

There is another thing that the superstar wild does. It absorbs any normal wilds that appear and thus increases the global multiplier that’s active during the feature. The best thing of all – the multiplier is unlimited.

…is the extra spin round. Once three scatters appear the feature starts and 10 spins are awarded. During the mode, the Superstar wild is always active and has no charges. All of the same rules apply and the multiplier is also in effect.

This new offering inspired by one of the icons of gambling will be available to punters exclusively on Betsson branded casinos starting December 9th before being distributed to other venues globally at a later time.