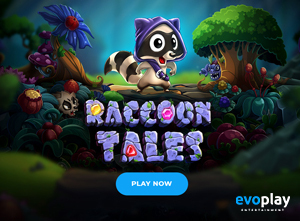 One of the leading slot creators, Evoplay, has announced the soon release of its latest game by the name of Raccoon Tales. The theme follows a curious raccoon that finds caves filled with various treasures. But his road is paved with difficulties since it has to battle the monsters and dragons in the process.

It is quite an interesting story, taking place in the forest, as well on the reels.

This makes the slot even more engaging...

...since two game fields are intertwined - the number of winning symbols on the reels will determine the power of raccoon’s attack on a rival.

Therefore, what happens on the reels will influence the raccoon’s actions and the creatures he encounters in the woods. Along the way, players will have the opportunity to trigger special slots features that might help them get to the maximum winning potential of $7,500.00.

Special Features that Stand Out the Most

With an RTP of 96.2%, this release comes with very high volatility levels and is fully optimized for all types of mobile devices. A 7x7 reel configuration and active background combined with excellent animation and superb graphics are enhancing the player’s experience even further.

...bonus rounds in this slot are flying left and right. Evoplay has incorporated 5 bonus mechanics, three distinct Extra Spin modes and 3 types of random events which promise a thrilling gameplay.

Features that really stand out are: Battles With Monsters, Random Events and quite an unorthodox Extra Spins Feature, so elaborate that deserves a separated chapter.

This game that’s changing slots history also gives players the opportunity to win some extra spins, but there is so much more involved in this bonus round. Here the raccoon has to engage in a battle with dragons. The rival is chosen randomly just before the bonus round starts.

When raccoon is faced with a dragon, all winning symbols will explode and charge the energy ball. Dragons are much powerful than the monsters and have hit points divided into 4 sections. When a section is emptied by the racoon’s attack, the dragon will get mad- the angrier the dragon, the higher the bonus.

Since there are 3 different dragons, and each has a unique bonus that is available during this feature:

…since conquering the fiery beast before the extra Spins feature ends, will result in a total bet being increased by 50x! So not only that this title is highly engaging, but also comes with high winning potential and for now it's available in the demo version.

It seems like the provider prefers making of the forest-themed game since its latest game was Forest Dreams. The news of this release hasn’t settled yet, and the developer has already announced the launch of Racoon Tales.

…while the setting is similar, the stories and gameplays are quite different. Racoon Tales truly provides a unique playing experience, so it comes as highly recommendable to all slot lovers. When it launches since the provider hasn’t specified the release date yet.